What are you doing to celebrate? Will you be waiting at the bookstore for the Cursed Child tonight? We’re definitely going to dress up and drink butterbeer. Maybe I’ll pop down to Barnes and Noble after Oliver’s asleep to grab a copy myself.

I’d also like to take this opportunity to reflect on a few of my favorite moments from the books, and from the films for that matter.

“Spew?” said Harry, picking up a badge and looking at it. “What’s this about?”
“Not spew,” said Hermione impatiently, “It’s S-P-E-W. Stands for the Society for the Promotion of Elfish Welfare.”

I always found S.P.E.W. to be funny and adorable. Hermione’s activist aspirations are just awesome. It’s part of her charm. I know this wasn’t necessary to include in the films. I totally get why it was cut, but part of me wishes there had just been a little scene included. At least a deleted scene.

When Neville stands up the Golden Trio in Sorcerer’s Stone, I think it’s the first glimpse we get of his greatness. Neville’s transformation throughout the series is one of the most interesting. While it’s easy to overlook him at first, this moment really shows his true courage and commitment to doing the right thing.

“That’s chess!” snapped Ron. “You’ve got to make some sacrifices! I take one step forward and she’ll take me — that leaves you free to checkmate the king, Harry!”

Another Sorcerer’s Stone moment, but it’s a fantastic one both in the film and the books! The giant Wizard’s Chess game the trio play to reach the Sorcerer’s Stone. Ron is always the goofball, but here he demonstrates his bravery. He really does have the heart of a lion that Ron. I also think Ron as always looked at as kind of an idiot or not the sharpest tool relative to the rest of the trio; mind you, he does make some imbecilic decisions now and then, but it takes a pretty intelligent person to be good at chess. 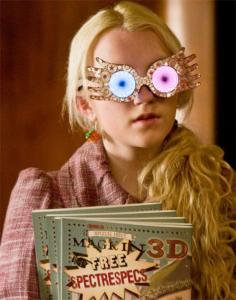 “Oh, yes,” said Luna, “I’ve been able to see them ever since my first day here. They’ve always pulled the carriages. Don’t worry. You’re just as sane as I am.”

With a single stroke, Neville sliced off the great snake’s head, which spun high into the air…

This had to be number one on today of all day’s, and there’s no doubt that this is an epic moment. Neville has come full circle, and by killing Nagini, he makes it possible for Harry to defeat Voldemort. He’s the unsung hero that eventually makes everything possible.

I liken him to Sam from Lord of the Rings. He may not be the main hero, but he plays a pivotal role. You’d never think it when we’re first introduced to bumbling, chubby little Neville, but in the end, he proves that greatness isn’t born. It’s made through our actions.

There are many more great HP moments, but these are just a few of my favorites. What are some of yours? What book of the series is your favorite?