Wow. I almost don’t even know where to begin. This retelling of Alice in Wonderland is one crazy, dark, wild ride. And I loved every minute of it. Even the parts that made me squirm.

First, I’d like to thank the staff at Ace for allowing me to review this. The Chronicles of Alice is a duology, the first part entitled Alice and the second part entitled Red Queen. I requested Red Queen on Netgalley, not realizing it was the 2nd part. Ace was kind enough to mail me a physical copy of Alice and will be partnering with me for a giveaway. They’re amazing! And I’m so grateful because this story was brilliant.

Picture this: Alice is a patient in an asylum with a cruel scar running from mouth to ear. She doesn’t remember why she’s there or how she got the scar. Just something about a rabbit, a tea party, and a lot of blood. Hatter is not a hatter, but Hatcher, the axe murderer who’s room in the asylum is adjacent to Alice’s. Cheshire, Rabbit, Caterpillar, and Walrus are all underground bosses terrorizing the streets of the crumbling Old City.

Alice begins with Hatcher and Alice’s escape from the asylum. As the hospital is ravaged by a fire, they watch it burn to see a dark shadow rise from the ashes. “The Jabberwocky!” cries Hatcher. Alice and Hatcher are forced into the dangerous streets of the Old City to find the one the one thing that can stop the Jabberwocky and where the Rabbit waits for her return.

This first book is creepiness to the max. I am not entirely sure how I got through it being a squeamish person. Perhaps it was the morbid curiosity that took hold of me as I read. I was horrified, but I couldn’t put it down. If you’re looking for the whimsical Wonderland, you will not find it here. I will fully disclose what you’re about to get into: this book is adult, dark, and horrifying. But if you can get through it, it is worth the read. I just wouldn’t recommend reading it alone at night.

The characters come to life in new and interesting ways. Making Hatcher an axe murderer was a brilliant choice. The relationship between him and Alice is amazing. This passage to me really speaks for the intensity between the two of them, yet the tenderness despite their utter madness:

“I won’t let anything happen to you, Alice. I will kill you before I let the Walrus or anyone else take you away from me.”

She gave a choke through her tears, a grim and not-so-merry sound. “Most men give a girl a ring you know, not threaten them with murder.”

Hatcher put his hands on her face so he could look into her eyes. “A ring won’t save you from the men who would use you and break you. I don’t want you to suffer, Alice, not one moment. I won’t let them take you.”

Cheshire is my favorite character, and I thought the characterization was perfectly done. He still retains the mad qualities of the original character while retaining the poise and grace of a cat.

I must offer a trigger warning for this first book though. Feminism is none existence. Male dominance and objectification of women are a huge theme throughout this first book, and the subject of rape is prevalent. It is not fun to read, though I can understand why it was included.

This book is disturbing. Period. But it’s also so well done that it’s hard to put down.

And then there’s the second installment, Red Queen, where Alice and Hatcher depart from the Old City to discover what lies in the world beyond. It’s worth getting through Alice to read this second part. While it still retains some of the creepy and dark elements from the first book, it does not contain quite as heavy subject matter. This book is that yang to the ying of the first installment.

While Alice was all about male dominance, this book noticeably shifts to discuss female power and the result is not quite as heavy. I believe Henry purposely wanted the two parts of the series to reflect opposite sides of the coin. She does a great job with the juxtaposition while still making the two books connect. Though I wasn’t thrilled with the portrayal of men in the first installment, women also don’t get a free pass in this book either. Alice faces the vile and evil White Queen, who also does some pretty stinking horrible things. 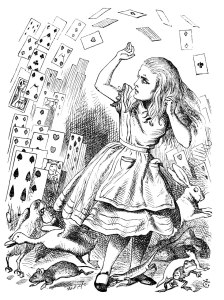 The evolvement of Alice in this book is amazing. In the first book, she grows frustrated with herself by following Hatcher around and not taking matters into her own hands. In this book, she is separated from Hatcher and is forced to make her own choices. It’s amazing to see her go from being a scared, little girl to a confident woman. She truly comes into her own.

I preferred this installment, just because it left a little less bile in my mouth and gives more hope to the reader. Like I said, I’m squeamish. Overall though, the Chronicles of Alice earns a solid 4.5 from me.

See my next post for details on how you can enter a giveaway for the first book Alice.

11 thoughts on “Magicians and Axe Murderers: The Chronicles of Alice by Christina Henry”