The Glittering Court by Richelle Mead is one of this month’s most anticipated YA novels. Did it deserve all that attention? I personally don’t think so. My recommendation for this book would be to borrow it from the library if you’re interested in reading it. Or if you enjoyed The Selection series and/or the Matched series, then this book is might be for you.  But I personally prefer more grit than this book has to offer.

This is another one of those romantic novels where I’m not sure why it was marketed and labelled as a fantasy. When I hear the word fantasy, I expect something fantastical. This book offers no magic, no unique creatures, no castles, nothing particularly otherworldly at all. I’m not sure whether to classify it as dystopian, western, alternative history, or simply general fiction. So we’ll settle with romance.

There is large reference to different religions and their methods of worship, some considered pagan. However, these were extremely underdeveloped. In fact, the world building was pretty null and void, hence the genre confusion. Despite the importance of religion in the story, I can’t tell you much about the religions of this world at all.  The only clear thing in the book is that Osfrid is a representation of Elizabethan England while the New World, Adoria, symbolizes colonial and frontier America. 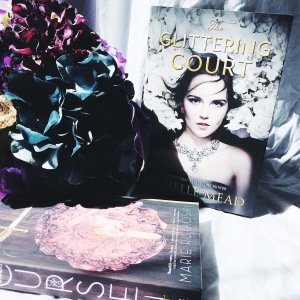 The writing in the book isn’t bad, but it isn’t particularly compelling. In fact, I’d say the first half of the book is fairly forgettable. It’s basically a glorified, book version of the tv show The Bachelor. It’s not much beyond the girls trying on dresses, going to parties, and talking about the rich men they someday hope to marry. And of course, we see Cedric and Adelaide’s blossoming but forbidden romance. Some comedy results from Adelaide’s attempts to conceal her identity and pretend to be part of the working class. But all in all, it was a bit boring.

The second half was much more enjoyable for me once the story focused less on the romance and more on the characters making lives for themselves in the New World. I wouldn’t call it riveting, but definitely more interesting. Adelaide’s character also gained some more emotional depth as she goes from the comforts of manors and ball gowns to living frontier life in the wilderness.

The book ends with a few loose ends for the secondary characters, which I’m assuming means that they will take the reins in the planned sequels. I doubt I will read them. And if I do, I won’t be spending the money on the book till after I’ve read it.

To each their own.

Tootle loo, darlings! I will see you on Monday!

8 thoughts on “The Glittering Court by Richelle Mead”