Why does this film have to be so good? It’s tormenting. It’s wonderful. It’s downright sadistic to the Star Wars lover.

True to form, Mr. McGinnis and I pre-ordered the blu-ray, and it arrived promptly on Tuesday. We waited patiently throughout the day for the family to gather so we could finally watch it once more. Each time I watch it, the wheels in my head spin anew with unprecedented thoughts and theories. This time was no different so expect me to broach the subject again shortly, and I pray that it doesn’t annoy.

Upon viewing this time, what caught my attention was the unsung parallels of the film to its predecessors. It’s easy to focus on the Luke/Rey parallels and the overall similarities to A New Hope and the other originals. The similarities are both glaring and subtle, giving all us fans plenty to talk about without thinking outside of these parameters. But what caught my eye this time time around was the film’s parallel to The Phantom Menace and Finn’s arc to Luke’s.

I know I’m among the marginally low amount of people who enjoyed the prequel trilogy.

In fact, many a person has said that this new trilogy is an attempt to make-up for “the disaster of the prequels” and deny all connection of Episode VII to Episodes I-III. And honestly, that’s just a whole lot of bollocks. The Force Awakens most certainly references the prequels. Maz Kanata’s castle is a perfect example of that. Adorning the ramparts are what appears to be hundreds of flags, including the flags of the podracers in Phantom Menace and symbols from Naboo.

Kylo Ren is an obvious parallel between The Force Awakens and The Phantom Menace. An insanely powerful former Jedi who has fallen to the Dark side. Sound familiar? A massacre of Jedi, like Order 66 in Episode III, is also heavily insinuated given Kylo’s background, Rey’s vision, and the mystery surround the Knights of Ren.

But it’s more than that. Those who compare The Force Awakens to A New Hope often ignore

that they’re comparing it to The Phantom Menace as well. For instance, Anakin, Luke, and Rey all grew up on a desert planet. But I’d say Rey’s origins are more similar to Anakin’s than Luke’s. Like Anakin, we find Rey on a desert planet, living in impoverished circumstances, ruled over by essentially an Alien hoarder and junk keeper. She’s a pilot, a whiz kid, and an insanely powerful but untapped force user. She is pulled into the story line due to her kind nature as she goes out of her way to aide BB-8 and Finn, not unlike how Anakin is discovered by helping Qui-Gon Jinn. 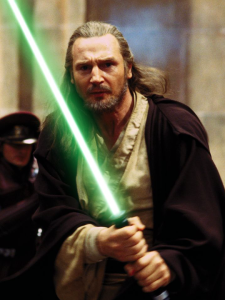 The symmetry continues with the death of Han Solo, a mentor figure. This element is found in the first film of all three of the Star Wars trilogies with the death’s of Qui-Gon, Obi-Wan, and Han. The mentor figure always dies at the hands of a Sith. In the case of The Force Awakens and The Phantom Menace, the mentor is killed by a Sith apprentice of an extremely powerful, largely unknown Sith Lord: Qui-Gon by Darth Maul, the apprentice of Emperor Palpatine, and Han Solo by Kylo Ren, apprentice of Supreme Leader Snoke.

These parallels between the two films are major plot points. It makes me even more excited for the remainder of the most current trilogy. The politics and warfare of the prequels were intriguing. I’m curious as to what else they will mirror and tie in.

Moving forward, I already immensely enjoyed the character of Finn. His background is

fascinating to me. After realizing the similarities to his role in The Force Awakens to Luke’s in A New Hope, I’m left in great anticipation to see what they do with him in the next films.  I couldn’t help but envision Luke taking off his helmet in A New Hope as we see Finn remove his stormtrooper helmet during the beginning of the film. Finn also is seen in the gunner seat of the Millennium Falcon like Luke. He also despises Jakku in the way that Luke resents his desert planet of Tatooine.

Beyond these Easter eggs, I feel that Finn embodies the function of Luke in A New Hope in a few major ways, the first being his personality. Luke starts out as the naive, wide-eye farm boy thrust into extenuating circumstances by the appearance of R2-D2 and the murder of his aunt and uncle. He is often the character asking questions, a tool for the screenwriters and directors to relay information to the audience. Finn is not so different. Like Luke, his life is turned upside down when he leaves the First Order, and he’s in unfamiliar territory. Thus, he asks a lot of questions. It’s through his line of questioning that we get onto the Millennium Falcon and on our way to the Resistance base. 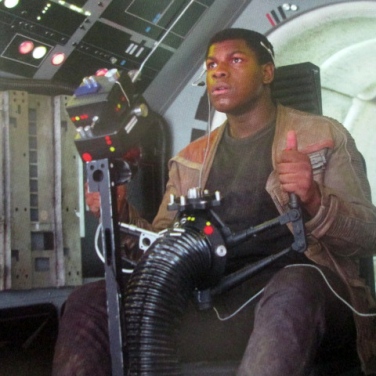 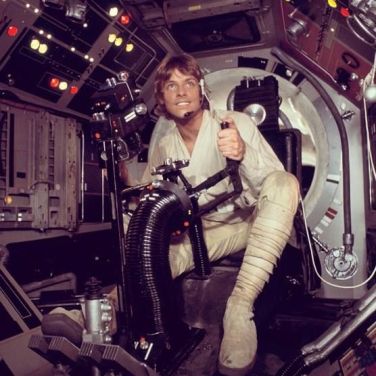 The second parallel is his receiving of the lightsaber. It struck me how deliberately Maz hands the lightsaber to Finn. This cannot be coincidence given that she’s Force sensitive. She could’ve just as easily given it to Han, which would’ve been the more logical choice given his connection to Luke and the Jedi. Finn, as I’ve previously discussed, exudes extreme faith in the Force, and I can’t wait to see how he will use it in the future.

The third is his rescue of Rey. Finn is the driving force of rescuing Rey, just as Luke is the one who decides initially to save Princess Leia. Both characters infiltrate a major enemy base in order to do so and enlist the aide of Han Solo and Chewbacca. As a result, both are enlisted by rebel forces rather unwittingly.

Overall, I feel that Finn’s story line is closer to Luke’s in A New Hope than Rey’s beyond some minor details.

What do you think? Do you like the prequels? Do you see what I see? Or am I quite mad and overthinking it? 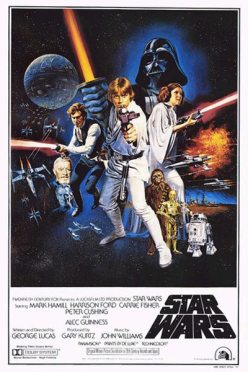 7 thoughts on “Upon Rewatching The Force Awakens”