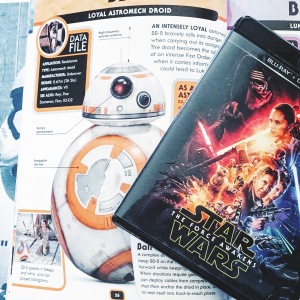 I’ve had quite the week since we brought Grimm home on Friday. He’s a perfect gentleman. A peeing, chewing, occasionally barking gentleman. But a gentleman nevertheless. I’m enjoying having him immensely, but between Grimm, Oliver, and both Taylor and I being sick, I’ve scarcely had time to do anything that requires more of my brain power.

However, our pre-ordered copy of The Force Awakens arrived last night, so naturally we had to watch it. It suffices me to write that you, dear reader, can expect me to say more about Star Wars in the not too distant future.

Down to business though. I did manage to read this lovely debut novel, Tainted Ink by Tania Johansson. Isn’t the cover gorgeous? The book is set in a world where those who are Skilled can swallow a substance called Ink, then use it to create and animate anything they can imagine with time and training. The story follows Bree and Erinn, childhood friends who are to learn the art of Drawing with Ink at the mysterious university on Painted Island, and Soler, an Ink maker and dealer in the city’s underground black market. Bree and Erinn have been dreaming of becoming Ink initiates their entire lives, but they begin to uncover the nasty, dark secrets of Ink, secrets that Soler knows.

I will try my best to write the remainder of my review without revealing any spoilers.

I liked it. The magic system of Ink was fresh and original. It has set limits but infinite possibilities in how characters can use it. The characters have clear personalities, though I feel that Bree and Soler were the most well developed. Bree, skeptical and ambitious. Erinn, gullible and fanciful. Soler, good-natured and charming. The relationships between these three primary characters flowed naturally, particularly Bree and Erinn’s sister-like bond with its ups and downs of comradery, jealousy, and loyalty.

However, many of the secondary characters felt like fodder, particularly the romance between Erinn and Isen. Their romance was baseless, going from initial attraction to “I want to spend the rest of my life with you” in quite a shockingly short amount of time without much emotional content.  Unfortunately, the remainder of Erinn’s arc rests on her relationship with Isen, so I can’t say that I enjoyed it as much as Bree or Soler’s plot. That being said, the ending was unexpected and left Erinn in an interesting position. Her evolution could be amazing in a sequel.

Overall, Johansson’s writing was easy and confident. I can see her being quite the successful authoress. The plot moved along at a nice pace and had enough surprise and intrigue to keep me turning the page. My only issue with Johansson’s choice to self-publish was the occasional typo, which I find particularly distracting in my reading as a former English tutor. An editor may also have helped her flesh out the world more as at times it was hard to get a picture of it. For example, the characters’ style of dress and word usage seemed fairly modern, but they rode horses and used wooden boats and swords. I was confused as to whether or not this was intentional. I would love to know more about it and get a better feel for the environment in a second book, which I would definitely read.

Disclaimer: I was provided with a free copy of this book in exchange for an honest review. My opinion is completely my own.