Valentine’s Day gets a lot of flack. True, I hate the commercialization of it. And the ignorant, romantic teenage version of myself thought it was stupid. Why do we need a day to celebrate love? Shouldn’t we celebrate love all the time? Yes, teenage Bailey, we should. But now that I’m an adult with a child who takes a fair bit of our time and money, I’ve realized that Valentine’s Day is just a wonderful excuse to spend some money for gifts and have some quality time alone as a couple.

But before I get to that, who’s stoked about the Star Wars new?! Production for Episode

VIII is officially underway! Disney also released announcements concerning new cast members. Please welcome Benicio Del Toro and Laura Dern! Rumor is that Del Toro will be playing a new villain. And I’m positive that Dern will be Rey’s mother. Maybe Del Toro could be her husband (I just really want for Rey to be a Kenobi). Either, I’m excited that these Oscar-caliber actors will be joining an already phenomenal cast!

And now for the date! Taylor planned for us to go see Marvel Universe Live at the arena in Salt Lake City. We thought it would be good fun, and then we could go out afterwards to eat at a Thai restaurant downtown.

But the nerdiness amped up when we exchanged gifts. Taylor presented me with a beautiful necklace of a golden Snitch. I had been eying on at the Yule Ball last month, but once I had decided to purchase it, it was gone. So I was stoked and happy when I opened the box to see one twinkling up at me. He also got me an R2-D2 can cooler for my soda. I am amazed by this phenomena; I didn’t think it was possible to enjoy Vanilla Coke more than I already do. But believe me, I can in the R2-D2 cooler. In short, my husband is the greatest. If you’re interested, you can purchase the Snitch necklace here and the R2-D2 can cooler here.

The Marvel Universe show was a good piece of mindless entertainment. It was a story of 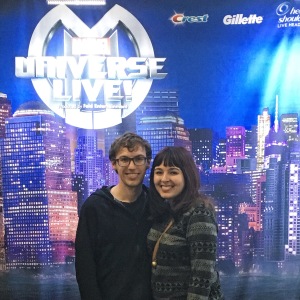 the Avengers gathering the pieces of the Cosmic Cube in order to defeat Loki and save the world. The experience was like watching a superhero Saturday morning cartoon on the stage. It was what you’d expect: stunts, explosions, motorcycles, and one cheesy one-liner after another. I was quite impressed though with the show’s lighting. The production’s catwalks and fly system would make any theater techie fall in love. All the amazing stunts,  acrobatics, and set pieces they could use it for were beyond impressive. The stunt man for Spiderman was particularly enthralling as his aerial performance was the most dynamic.

Spiderman. Spiderman. Does whatever a spider can!

After we ate a delicious Thai dinner, I insisted that we pay a visit to Eborn books, my all-time favorite bookstore. I have to go there every time I’m downtown. And I’ve only seen it expand overtime.

There used to be a public bathroom, but there’s too may books now.

After driving around the maze of Salt Lake City roads, trying to find parking, and finding to navigate the right turn only streets, we finally found a tucked away parking garage behind the building. Where I found this miraculous mural! It was the most beautiful thing I’d ever seen! I could hardly contain my excitement!

We also found this rare gem in the science fiction section. It’s verges on the sacrilegious, but I couldn’t help but think it a rare treasure. Taylor practically had to pry it out of my fingers so that I didn’t take it home and put in on my shelf next to my complete works of Shakespeare.

Captain, inform the ship that we wish to board their ship, anon!