It’s been a good weekend. I played Magic for the first time (awesome game), our costumes for Comic Con started coming in the mail, the Super Bowl happened, which I didn’t really care about but Coldplay performed the halftime show, which is always good news for me.

Oh! And this video of my cute little Ollie Hoot gained some traction over Facebook!

But one of the more important pieces of news within the film world recently is the winners of the Screen Actor’s Guild Awards, or SAGs. Which is just prepping us all up for the Oscars at the end of the month.

Watching the Oscars is a tradition that my husband and I have established in our house as film junkies. I make my spinach artichoke dip, and we watch the whole thing from the arrival of the stars on the carpet all the way through all the acceptance speeches. I have clear memories of flipping through People magazine as a kid and looking at all the dresses of the attendees. I love seeing the nominations, the winners, and the remarks given by all those involved in the film making process. And the line-up this year looks awesome.

Many members of the SAG panel are also on the Academy. While it doesn’t guarantee the outcome  of the Oscars, it’s a good litmus test to predict the winners. And it’s looking like a great year for Leonardo DiCaprio, for once!

If you’re reading this, I’m sure you’ve reposted one of many memes regarding Leo’s lost Oscar nominations like the one to the left. His most recent film The Revenant is clearly the favorite of the SAGs and the Oscars. The Revenant is nominated for 12 awards, including Best Picture and Best Leading Actor. This is DiCaprio’s 6th time being nominated for an Oscar. And his first year going home as the winner of the SAG reward. If he doesn’t win this year, he’s truly been robbed. Seriously, give the man a break. Out of all the nominees, he is the most deserving.

nominated for), but there are plenty of other worthy nominations. The Martian and Bridge of Spies were both completely brilliant and two of the three best movies I’ve seen this year (the third being The Force Awakens). While I don’t think they’ve gained the traction to win, but seriously, you have to watch these movies. The Martian was better than the novel source material. Matt Damon brought a real sense of humanity and vulnerability that was lacking from the book. He’s be my second choice for Best Actor (but I really want Leo to win for once). Bridge of Spies was beyond touching and one of Tom Hank’s best performances. I’m genuinely surprised that Hanks wasn’t up for a nomination. I’ve heard nothing but good things about Brooklyn, Spotlight, and The Big Short, all on my to-watch list. Mad Max, sorry but you have no chance of winning.

I feel like Eddie Redmayne was only nominated because his role was transgender and lined up with some of last year’s biggest controversies. I’m sure I’ll get flack for saying that, but while the reviews were generally positive among critics, it didn’t garner much attention. The public, cisgender and transgender alike, also didn’t seem to love the film either. In fact, most reviews I’ve seen for it called it ‘forgettable.’

I’d kinda love it if J-Law won another Oscar. Seriously, she’s one of the greatest actresses of this generation. Here’s to hoping.

Apparently, I need to see the Steve Jobs movie. I had no idea Kate Winslet was in it. It was on my list already, but that fact alone has bumped it up quite a ways on the priority list.

Inside Out is going to win Best Animated Feature. Seriously, I don’t know why we bothered

nominating other movies. I was also excited to see it as a nominee for Best Original Screenplay. Pixar has done amazing in that department. I’m 95% positive that Pixar films are the only animated films to have ever been nominated for Original Screenplay. It would be historical if Inside Out won! However, my money is on Bridge of Spies or Spotlight.

As far as adaptions, again I think The Martian deserves Best Adapted Screenplay because the movie greatly improved upon the novel. But there are many other contenders so for me it’s kind of a toss up.

Let’s all applaud John Williams for his 50th Academy Awards nomination. He’s been nominated for more Oscars than anyone else. I loved the score for The Force Awakens. 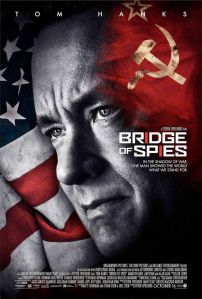 However, I don’t think it’s the winner this year. The themes lacked the novelty of its predecessors. Thomas Newman’s score for Bridge of Spies was brilliant. It was original, yet recognizable. I sat through the whole movie saying this is a Thomas Newman score. He took his signature elements and totally elevated them.

And my last but not least honorable mention is Cinderella for best costume design. The costumes in that film were the most memorable of the other nominees and had the individual challenge of representing the iconic characters of the film’s animated predecessor. The costumes were truly a beautiful reboot and representation of the animated film. Cinderella’s iconic blue ball down was simply stunning.

I mean, let’s be real. Which is more impressive? Leo’s leather jacket and stick, or all the fluff on that dress?

All and all, at the end of the day, I’m just excited to watch the Oscars this year. What about you? Do you have any Oscar night traditions? What are your predictions?