Publishers and Hollywood are scrambling to find the next big YA trend. We had magic schools with the success of Harry Potter. The rise of vampires after Twilight. The takeover of dystopia with The Hunger Games, which paved the way for Divergent. But now we’re all growing weary of the totalitarian-themed fiction and all the B and C class knocks offs.

So what’s the next big thing? Is it aliens?

Personally, I don’t think so, but I think the search has given way for the newfound popularity of The 5th Wave by Rick Yancey. I bought the book from Barnes & Noble, skeptical after all the comparisons I’d heard to Hunger Games, not even really sure what it was about. But in the end, I finished the book in a matter of days and ended up giving it 4/5 stars on Goodreads.

As a disclaimer, I will say that if you like The Hunger Games, you will probably like The 5th Wave due to the similar writing style and strong female protagonist. However, the similarities regarding to plot are far and in-between, verging more onto archetypes, which could be said of any book. More appropriate comparisons would be The Host or Ender’s Game. There’s some lack of originality, which is one of the few reasons I did not reward the book 5 stars.

But I’d be lying if I didn’t say that I wasn’t thoroughly impressed with the novel. I’m an emotional reader. While I’m picky about good technical writing and character development, what impresses me most is when the novel has the ability to make me feel something. Isn’t that the biggest purpose of telling stories? To transcend our every day lives to bring humanity together in our emotions and similarities. 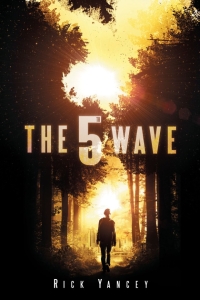 The 5th Wave made me feel something. I felt like I was right there caught up in the horror of the first 100 pages as we learn about the different methods of devastation the extraterrestrials, called The Others, have poured down on humanity. I was worried, I was scared, I was on edge, wondering what would come next. My eyes glazed on the verge of tears as loved ones of the protagonist were picked off one by one. I put myself in their shoes, questioning how I would feel and replacing the characters with my family members.

Part of this was the masterful writing on Yancey’s part. Despite part of his narration being from the first-person perspective of a teenage girl, it never feels contrived, which I usually expect when the author is writing for the opposite gender. In fact, Cassie’s narration takes on a bit of a rambling quality. To me, it sounded just like a young girl who had spent a long time alone, scared, and paranoid.

In fact, the paranoia was transferable. Trust is a major theme of the story. As the plot unfolded, I found myself constantly doubting characters and doubting my ideas about them. Were they good? Were they bad? I don’t know! I don’t know! Part of what emoted these feelings is that Yancey did a great job of avoiding common YA clichés, even when you think he’s going to play into them. As a result, you’re kept guessing.

The novel also made some poignant remarks, not only about trust, but about humanity and God during crisis situations. All in all, I thought the novel was intense and quite wonderful.

And then last night, I saw the movie. Which I can’t say that I have as stellar remarks for.

It’s not the worst YA adaptation ever. I’d say it falls in the middle of the pack. But it definitely did not live up to it’s original text.

We’ll start with the good first. The beginning was intense. Like really intense. Chloe Grace Moretz did a good job of portraying the rollercoaster of emotions that Cassie experiences. I was also really impressed with newcomer Alex Roe, who brought believability and charm to Evan, who I thought was the most unbelievable character in the novel. The soundtrack was good, and there were some artistically beautiful shots.

But let’s get to the bad.

The filmmakers decided to use voiceover narration, which I really hate in films, especially in this kind of situation because it breaks the feeling of isolation that the character is feeling. I’d much rather have plot information given through dialogue and cinematography.

The effects were sloppy and looked hastily put together.

The character and plot development were rushed, which not only made it confusing, but didn’t evoke much concern or connection from the audience.

Which was probably the worst thing about the whole movie was that it completely lacked the heart and emotional depth of the novel. Instead of instilling that paranoia and mistrust, the twists were unsurprising and felt gimmicky.

Some of the most poignant themes of the whole book were also completely skipped over. Cassie’s dad gives a great line in the book, which Cassie constantly uses as a point of reference when making decisions. But we didn’t get any of that. Sammy’s prayer to comfort him is changed to a Coldplay song. Which I guess if you’re going to take God out of things Coldplay is an okay replacement. I mean, they are my favorite band. But the avoidance of religious themes, especially when they are in the book, bothers me.

Basically, instead of opening a dialogue, the film dumbs it down for viewers, completely missing the mark in translating the purpose of the book.

Conclusion? Read the book first. The film will spoil the best of the book if you see it beforehand. You can watch the movie too. But wait till it’s $5 movie night or till it comes out on Redbox.

3 thoughts on “The 5th Wave: Book vs Film Review”